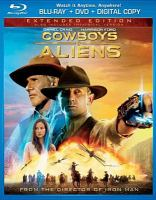 General Note
Title from container.
General Note
Unrated version (2hr., 15 min.) contains material different from the original PG-13 rated version.
General Note
Includes bonus features: Conversations with Jon Favreau; Igniting the sky: the making of Cowboys & Aliens; feature commentary with the director.
Participants/Performers
Clancy Brown, Daniel Craig, Harrison Ford, Olivia Wilde, Sam Rockwell.
Description
The Old West.. where a lone cowboy leads an uprising against a terror from beyond our world. 1873. Arizona Territory. A stranger with no memory of his past stumbles into the hard desert town of Absolution. The only hint to his history is a mysterious shackle that encircles one wrist. What he discovers is that the people of Absolution don't welcome strangers, and nobody makes a move on its streets unless ordered to do so by the iron-fisted Colonel Dolarhyde. It's a town that lives in fear.
Target Audience
Theatrical version: MPAA rating: PG-13; for intense sequences of western and sci-fi action and violence, some partial nudity and a brief crude reference.,CHV rating: 14A; for violence and frightening scenes.
System Details
Blu-ray ; widescreen ; requires Blu-ray player.
System Details
DVD, widescreen; region 1, 5.1 and 2.0 Dolby Digital.
Language
English, dubbed Spanish or dubbed French with optional Spanish or French subtitles.
Language
English subtitles for the deaf and hard of hearing (SDH); video descriptions for people with visual disabilities.
Local note
BLU-RAY