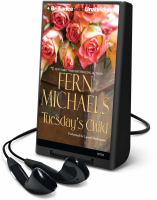 General Note
One set of earphones and one AAA battery required for playback.
General Note
Title from Playaway label.
General Note
Issued on Playaway, a dedicated audio media player.
General Note
Previously released by Brilliance Audio, p2012.
Participants/Performers
Performed by Laural Merlington.
Description
On the eve of her retirement, Georgia attorney Mikala Aulani is as vivacious and vibrant as ever, eagerly anticipating a happy future with her partner, Ben. But if Kala has learned anything in thirty-five years of practicing law, it's that the truth can always surprise you. And when Adam Star turns up at her office, confessing to the long-ago murder of his wife, Kala must return to a notorious case that has never stopped haunting her. Ten years have passed since young nurse Sophie Lee was accused of murdering her wealthy patient, Audrey Star. Kala defended Sophie and had no doubt of her innocence--or of Adam Star's guilt--but the prosecution convinced a jury otherwise. Sophie was convicted on a Tuesday--the day on which every significant event in her life, good or bad, seems to happen. Now, on the verge of his death, Adam exonerates Sophie and also leaves her a huge fortune in atonement. Released from prison, Sophie retreats to Kala's house and tries to evade the media frenzy that surrounds her. Kala is determined to help her client make her way back into the world and adjust to her new wealth and freedom. Yet for both, there are still revelations in store--about the nature of redemption, the strange workings of fate, and the power of forgiveness. And most of all, about the secrets that hide in every heart--even those we think we know best.
Local note
PLAYAWAY
Published Reviews
Reviews from GoodReads
Loading GoodReads Reviews.
Citations
APA Citation (style guide)

Note! Citation formats are based on standards as of July 2010. Citations contain only title, author, edition, publisher, and year published. Citations should be used as a guideline and should be double checked for accuracy.
Staff View
Loading Staff View.
Powered By Aspen Discovery supported by ByWater Solutions
v. 21.07.01
Loading, please wait
...