Our brand is crisis
(Blu-ray) 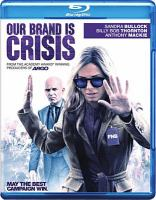