The man with the iron fists. 2
(Blu-ray) 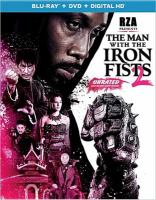