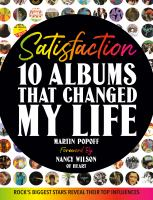 General Note
"Rock's biggest stars reveal their top influences."
Description
"It's a simple question, really. What music influenced some of the biggest stars of classic rock? Discover the answer and more in Satisfaction: 10 albums that changed my life, a big, bold and lavish celebration of the music that matters the most to the artists who matter the most to us. Filled with more than 1,000 photographs of albums and artists who helped shape the music scene forever, Satisfaction offers a rollicking and reflective ride with the musicians--18 of whom are in the Rock and Roll Hall of Fame--who pull back the curtain, drop the façade and share in their own words what music shaped their own musican journ[ey]s. You'll hear from a mix of artists as diverse as the music itself: Stewart Copeland of the Police, Art Garfunkel of Simon & Garfunkel, John Hall of Hall & Oates, British blues legend John Mayall, Henry Rollins of Black Flag, and a multitude of others including the Beach Boys, Tom Petty and the Heartbreakers, Blondie, Cheap Trick, Devo, Boston, Foghat, Alice Cooper Group, America, Electric Light Orchestra, Quiet Riot, Jefferson Airplane, Black Sabbath, KC and the Sunshine Band, the Yardbirds and man, many more. Rock and roll never forgets, and now you'll understand why with Satisfaction: 10 albums that changed my life"--Back cover.
Published Reviews
Reviews from GoodReads
Loading GoodReads Reviews.
Citations
APA Citation (style guide)