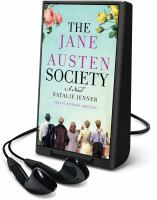 General Note
Title from Playaway label.
General Note
Originally published by Macmillan ℗2020.
General Note
Release date supplied by publisher.
General Note
Issued on Playaway, a dedicated audio media player.
General Note
One set of earphones and one AAA battery required for listening.
Participants/Performers
Performed by Richard Armitage.
Description
Just after the Second World War, in the small English village of Chawton, an unusual but like-minded group of people band together to attempt something remarkable. In the early 1800s, Chawton was the final home of Jane Austen, one of England's finest novelists. By the 1940s, little remains of her legacy but a few distant relatives and their diminishing estate, including the cottage where Austen wrote or revised her books. With the winds of change blowing through the country in the postwar days and the cottage's future now in the hands of fate, a group of disparate individuals fight to preserve both Austen's home and her legacy for the world. These people -- a farmer, a young war widow, the village doctor, an employee of Sotheby's, a Hollywood star, a local solicitor, the anticipated heiress to the estate, and a precocious house-girl -- could not be more different, and yet they are united in their love for the works and words of Austen. As each of them endures their own quiet struggle with loss and trauma of war and other tragedies, they finds solace, connection, and hope in rallying together to create the Jane Austen Society"--,Provided by publisher.
Local note
PLAYAWAY
Published Reviews
Reviews from GoodReads
Loading GoodReads Reviews.
Citations
APA Citation (style guide)

Note! Citation formats are based on standards as of July 2010. Citations contain only title, author, edition, publisher, and year published. Citations should be used as a guideline and should be double checked for accuracy.
Staff View
Loading Staff View.
Powered By Aspen Discovery supported by ByWater Solutions
v. 21.07.01
Loading, please wait
...