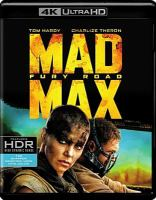 General Note
Title from container.
General Note
Originally released as a motion picture in 2015.
General Note
Widescreen (16x9, 2.4:1).
Participants/Performers
Tom Hardy, Charlize Theron, Nicholas Hoult, Hugh Keays-byrne, Josh Helman, Zoe Kravitz, Nathan Jones, Abbey Lee.
Description
A return to the world of the Road Warrior, Max Rockatansky. Haunted by his turbulent past, he believes the best way to survive is to wander alone. Nevertheless, he becomes swept up with a group fleeing across the Wasteland in a War Rig driven by an elite Imperator, Furiosa. They are escaping a Citadel tyrannized by the Immortan Joe, from whom something irreplaceable has been taken. Enraged, the Warlord with his gangs, pursues the rebels ruthlessly in the high-octane Road War that follows.
Target Audience
Rating: R; for intense sequences of violence throughout, and for disturbing images,CHV rating: 14A.
System Details
DVD, widescreen (16x9, 2.4:1) presentation; Dolby digital 5.1; described video.
Language
English, Spanish or French dialogue; Spanish or French subtitles; subtitled for the deaf and hard of hearing; described video.
Local note
DVD