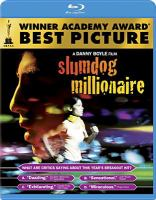 General Note
Title from container.
General Note
Based on the novel by "Q & A" by Vikas Swarup.
General Note
Originally released as a motion picture in 2008.
General Note
Special features: Commentary by director Danny Boyle and actor Dev Patel; commentary by producer Christian Colson and writer Simon Beaufoy; deleted scenes; "Slumdog dreams: Danny Boyle and the making of Slumdog millionaire" featurette; "Slumdog cutdown" featurette; "From script to screen: toilet scene" featurette; Indian short film: Manjha Bombay liquid dance; theatrical trailer; BD-Live: Bootstrap.
Creation/Production Credits
Director of photography, Anthony Dod Mantle ; editor, Chris Dickens ; music, A.R. Rahman.
Participants/Performers
Dev Patel, Anil Kapoor, Madhur Mittal, Freida Pinto, Irrfan Khan.
Description
Jamal Malik is an 18 year-old orphan from the slums of Mumbai. With the whole nation watching, he is just one question away from winning a staggering 20 million rupees on India's version of 'Who Wants To Be A Millionaire?' When the show breaks for the night, police arrest him on suspicion of cheating. Desperate to prove his innocence, Jamal tells the story of his life in the slum where he and his brother grew up. He describes their adventures together on the road, of vicious encounters with local gangs, and of Latika, the girl he loved and lost. Every chapter of his story reveals the key to the answer to one of the game show's questions. Jamal's increasingly layered story reveals where he learned the answers to the show's seemingly impossible questions. When the new day dawns and Jamal returns to answer the final question, the Inspector and sixty million viewers watch to find out if he can answer the question of how anyone comes to know the things they know about life and love.
System Details
Blu-ray disc, widescreen (2.35:1), Dolby DTS-HD Master 5.1 surround, Dolby Digital 5.1 surround, 50Gb dual layer, AVC@28 MBPS.
System Details
This Blu-ray disc will not play in standard DVD players.
Language
English or Hindi (DTS-HD 5.1) or dubbed French (Dolby 5.1) dialogue, English, French or Spanish subtitles; English subtitles for the deaf and hard of hearing.
Local note
BLU-RAY