The assassination of Jesse James by the coward Robert Ford
(DVD) 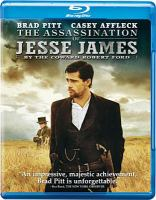