The lord of the rings. The fellowship of the ring
(Blu-ray / DVD Combo) 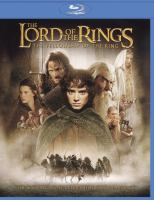